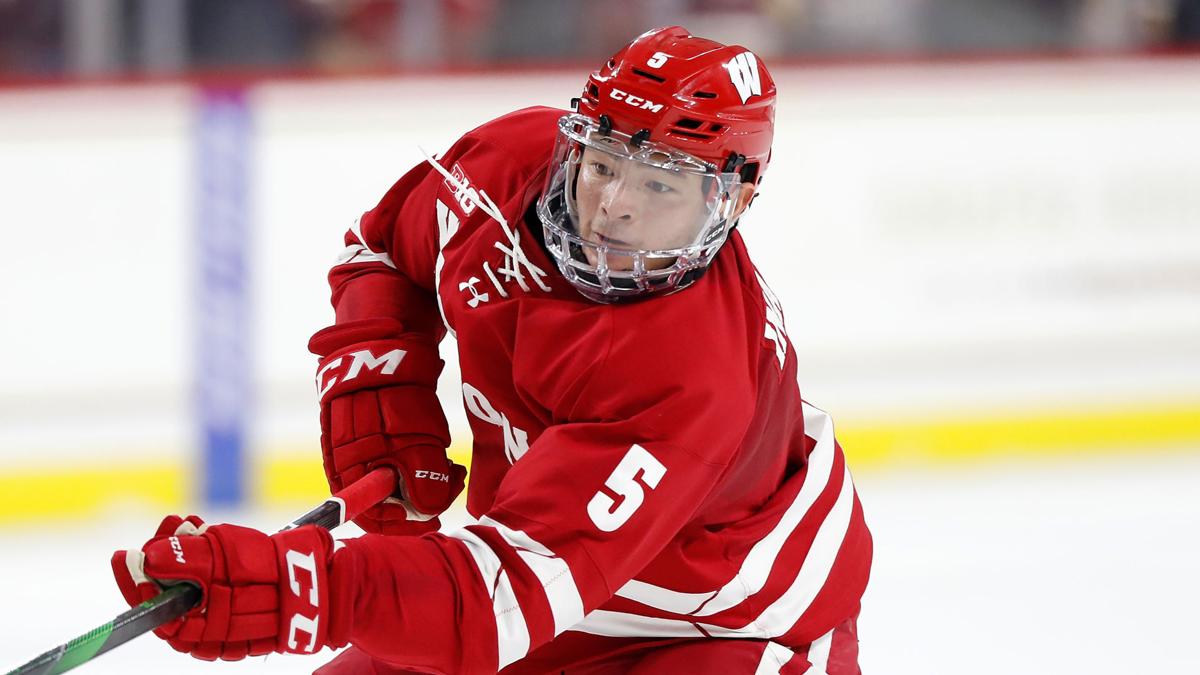 Defenseman Tyler Inamoto says the Badgers have skill, but that's not the extent of the team's identity: "We're a team that's willing to do the dirty work."

With good timing. The Badgers had just been swept by a Penn State team that entered the series hungry to return to its preferred style of play.

Now, it’s No. 12 UW’s turn to find its game as it plays a non-conference series at No. 20 Omaha. The contests Friday and Saturday offer the Badgers an opportunity to better define themselves — to both those inside and outside the program.

Badgers men's hockey preview: No. 12 Wisconsin plays at No. 20 Omaha

The foundational elements of UW’s identity haven’t changed, Granato said, even with a more highly skilled collection of players than the team has had in past seasons. For the Badgers to be successful, the coach told his players before Monday’s practice, they need to have a strong work ethic, play as a group, be selfless and show a high level of toughness.

“Coach always preaches that at the end of the game, he wants the other team to know that we competed our (butt) off, we executed well,” junior defenseman Tyler Inamoto said. “We’re a young team, we’ve got skill, but it’s not all about skill. We’re a team that’s willing to do the dirty work.”

The Badgers are trying to make that ideal a normal part of operations, and last weekend’s pair of losses at Penn State showed that they have work to do.

The head-scratching part for Granato was that the Badgers showed their best side two weeks earlier when they hit on the key points of their desired identity in two home victories over two-time defending NCAA champion Minnesota Duluth.

“We played with a pizzazz to our game and a high-energy game,” Granato said. “And the Penn State series, we just never got to that level. We were watching a lot. We stood around a lot.”

Falling behind in the first minute of the first game put the Badgers on their heels right away last weekend, captain Wyatt Kalynuk said.

“It felt like we were treading water right from the start,” he said.

Players have recognized through four weeks of the season that UW has a tendency to slump after allowing goals. That’s something they know they can’t allow to become a season-long trend.

“We learned something last week, that it’s not going to be easy for us,” Kalynuk said. “There’s going to be games where they score on the first shift or we’re down 2-0 in the first five minutes. I think we’ve just got to learn from it because that’s going to happen again — not just once, probably a number of times this year.”

The Badgers have more pure scorers on the team this season, so their identity now also reflects that offensive punch. But last weekend displayed that when the team isn’t aggressive enough in the offensive zone, even the most skilled players will have trouble generating goals.

“It really let us take a big-picture look at where we’re at as a group,” junior forward Sean Dhooghe said of last week’s losses, “and an early evaluation of where we need to go.”

More answers will come against Omaha, a team that was picked to finish seventh in the eight-team National Collegiate Hockey Conference but has caught some attention with a 4-1-1 start.

UW hasn’t played the Mavericks since December 2016, so the Badgers are largely unfamiliar with third-year coach Mike Gabinet’s team.

The traditional scouting report from the coaches means that they won’t go into the series blind on Omaha’s tendencies, but they’re OK this week with turning attention on themselves.

“If we focus on ourselves and we play how we can, I don’t think there’s many teams that can hang with us,” junior forward Ty Pelton-Byce said.

UW was caught off guard the last time it played a somewhat unfamiliar opponent, losing to Clarkson 4-0 on Oct. 25 before rebounding for a 4-3 victory the next night.

Despite that, Granato wanted the players to develop their identity, not let the opponent’s style dictate it.

“The thing that any good team has and focuses on is themselves,” he said. “I don’t want to get away from that. I want us to realize that no matter where we play, when we play, no matter what the score is, no matter who you’re playing with, I want us to play a certain way.

“So I don’t want to overprepare for Omaha. I want us to overprepare as far as getting ourselves ready to play the way we need to play no matter where we play or who we play.”

After losing three out of their past four games, the Badgers fell from sixth in the Oct. 21 national rankings to 12th this week, still a healthy amount of respect for a 4-4 team.

“So I think people know what kind of team we’re capable of being,” Granato said. “Now, let’s be that team. Let’s not be the capable team.”

As players give oral commitments to the University of Wisconsin men's hockey team, we'll add them here with their stats.