Skip to main content
You have permission to edit this collection.
Edit

We know the Badgers’ Big Ten contest against Nebraska is off, but plenty of uncertainties remain.

With team activities shut down and Saturday’s game at Nebraska canceled, the University of Wisconsin football team and its fans are in wait-and-see mode.

The Badgers — ranked ninth in the Associated Press Top 25 poll — are attempting to stop a COVID-19 outbreak within the program, one that prompted UW administrators to make the Badgers the first Big Ten Conference team to cancel a game this season.

No new information was released Friday by the UW athletics department, which said the program will provide further updates Saturday and that its players are being tested daily despite the shutdown.

With news regarding the Badgers’ COVID-19 outbreak changing by the day, here are answers to some frequently asked questions about the outbreak and what lies ahead for the Badgers:

How many Badgers have contracted COVID-19?

As of Thursday evening, the Badgers football program has 16 active cases of COVID-19 — eight student-athletes and eight staff members. The program only identified one of those cases, saying head coach Paul Chryst has contracted the virus. Sources told the State Journal that offensive coordinator Joe Rudolph and quarterbacks Graham Mertz (above) and Chase Wolf were among those to test positive.

UW athletic director Barry Alvarez said during a news conference Wednesday that the program had one positive test in the first few weeks of daily testing. Then one student-athlete tested positive on Wednesday, Oct. 21, followed by 15 more people within the program between Saturday, Oct. 24, and Wednesday.

Public Health Madison and Dane County told the State Journal on Tuesday that 60 COVID-19 cases are identified as being associated with UW football. The dates of those positive tests range from early June to Monday.

Why is Saturday’s canceled game at Nebraska a no contest if the Badgers aren’t at “red/red” levels? 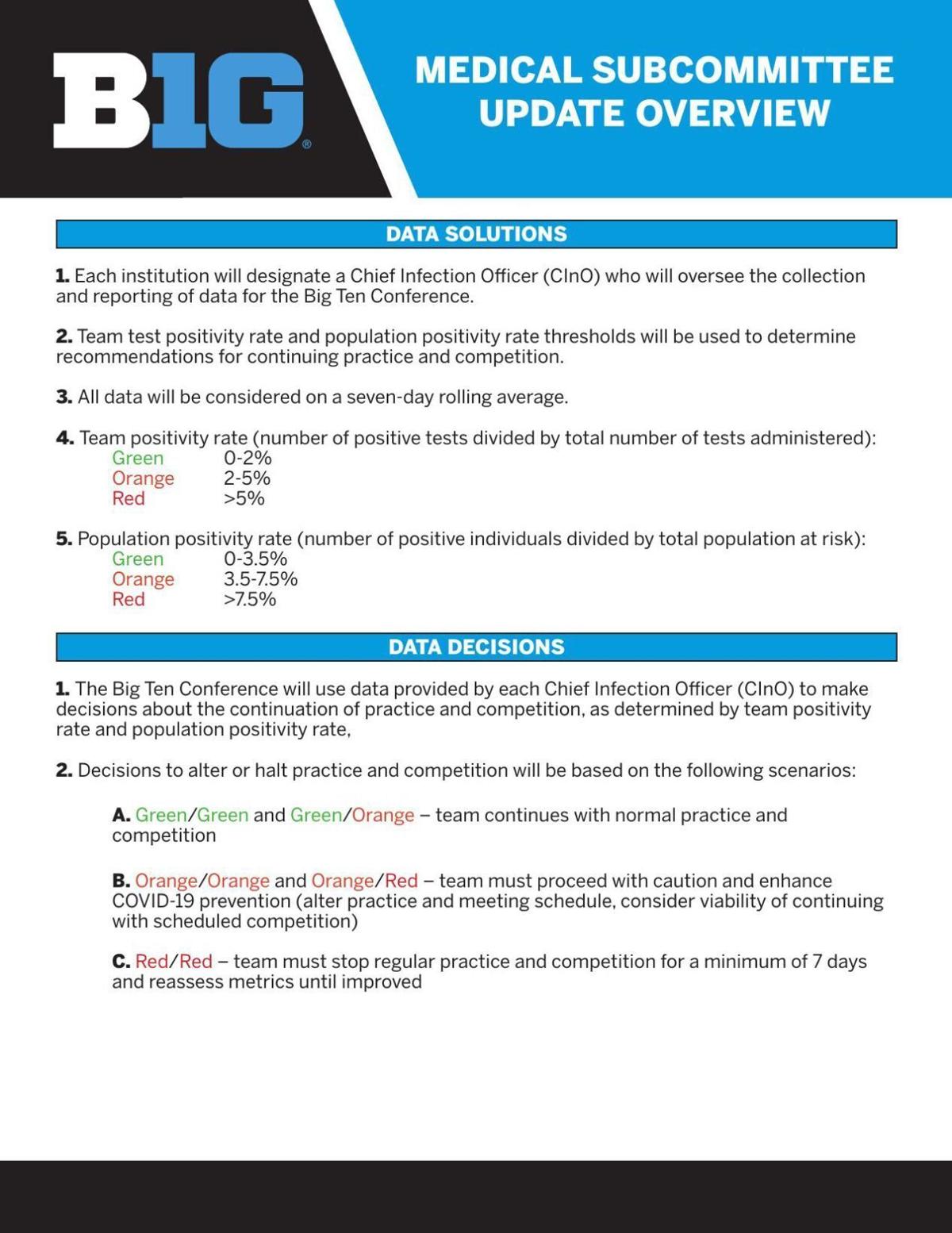 Because UW’s decision was based on its COVID-19 testing numbers, the game is considered a no contest and won’t be counted on either team’s record.

Per Big Ten protocols, a program must “proceed with caution and enhance COVID-19 prevention” and “consider viability of continuing with scheduled competition” if it reaches “orange/red” levels. Alvarez said UW decided to pause its team activities and cancel the Nebraska game to stop the spread of the virus and “get their arms around it.”

Will they schedule another game?

When the Big Ten debuted its truncated schedule calling for nine games in nine weeks, the lack of open dates eliminated chances to reschedule games during the regular-season window. UW and Nebraska won’t play this weekend and will not make the game up.

Nebraska requested Thursday that the Big Ten change its ruling about allowing non-conference games in an attempt to play a game Saturday against Tennessee-Chattanooga. The conference denied the request.

Does Illinois’ team have COVID-19 cases after playing the Badgers?

Illinois’ program has not made any announcement regarding its testing, but the typical incubation period for the novel coronavirus means it is possible.

Illinois coach Lovie Smith told reporters Wednesday that his team had no new cases of COVID-19 since playing UW at Camp Randall Stadium.

Will the Badgers play next week?

To be determined. UW is slated to host Purdue on Nov. 7. If the Badgers can stop the spread of the virus, there’s some hope they could play that game.

Chryst said he believes three days would be enough time to get the Badgers ready to play. Chryst will not be allowed to be around the team until at least Nov. 7 because he must complete a 10-day isolation before returning to in-person coaching.

Why do the players who have contracted the virus have to sit out 21 days?

The Big Ten requires that players wait at least 14 days from their initial diagnosis to go through a cardiac screening that can clear them to start working back toward competition. The league also built in seven more days for players to build back toward competition after being cleared in the cardiac testing.

The 21-day break from game action is the longest league protocol among the Power Five conferences.

Jim Borchers, the team physician at Ohio State who was co-chair of the Big Ten’s return to competition medical subcommittee, said experts told the conference that cardiac testing and evaluation couldn’t start until two weeks after diagnosis.

However, this 21-day layoff has come under scrutiny this week.

A report published in the Journal of the American Medical Association found little evidence of myocarditis in COVID-positive college athletes who had mild or no symptoms. The report didn’t recommend cardiac testing to the level the Big Ten is conducting.

Alvarez (above) told Sports Illustrated that the Big Ten should “reevaluate” the protocol.

Can the Badgers still make the Big Ten championship game?

Yes, but they can’t miss many more games.

The conference changed its divisional tiebreakers for this season, and those modifications will now be necessary considering at least two teams — UW and Nebraska — won’t complete the eight-game regular-season slate.

How are the players doing? Are they symptomatic?

UW is not releasing updates regarding individual players’ illness and has not said whether some or all have experienced symptoms of COVID-19.

During a Zoom call with reporters Wednesday, Chryst said he felt fine physically.

In an effort to stop the spread of the virus, players are isolating themselves in their living spaces. UW has secured hotel rooms to separate those who live together.

The football team is not to come to the team’s facility other than for daily COVID-19 testing, picking up food, and sports medicine treatment. No workouts are allowed, and the program has discouraged players from going to other gyms on campus or in the community.

The 22 active cases is up six from the numbers released by the program on Thursday, with two more staff members and five more players testing positive.

From possible false negatives to the search for the source, examining the complications of containing the Badgers’ COVID-19 coronavirus outbreak.

The gap between the truly elite and the rest of college football was never more apparent Saturday as No. 1 Clemson gave a glimpse of life after Trevor Lawrence and No. 3 Ohio State toyed with what was supposed to be its toughest opponent.